Cardano Smart Contracts and the ADA Mechanism: A Beginner’s Guide! 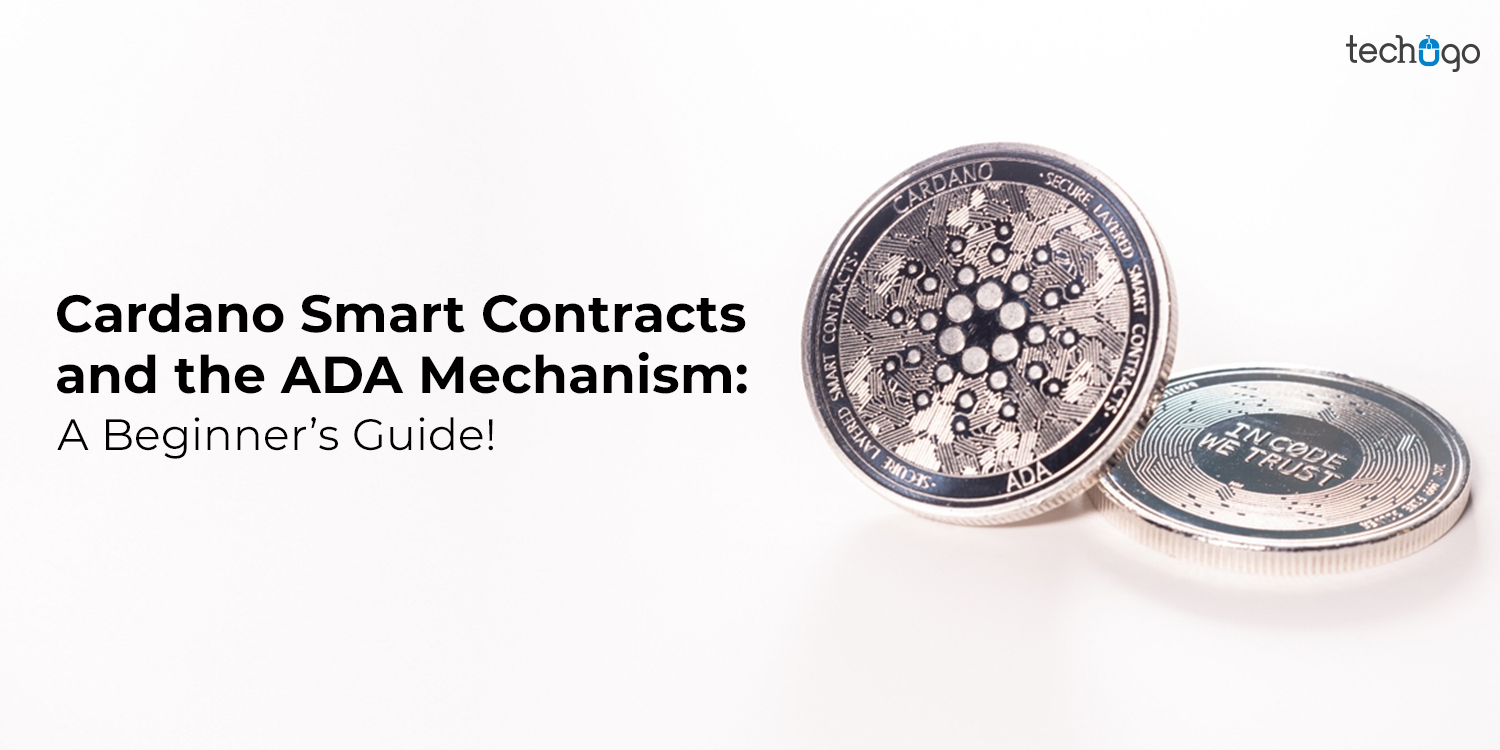 How do you transact online nowadays?

Many would say credit/debit cards; others prefer digital wallets. However, a medium of exchange that has acquired massive popularity is cryptocurrencies.

This decade has witnessed innumerable advancements; one of the top-notch discoveries is Cardano Smart Contracts, which is making an enormous name for itself in the crypto world.

Cardano, also known as the ADA smart contracts, came into the picture in September 2021 that empowered the blockchain platform for creating smart contracts.

Stop scratching your head! We are well aware of the confusion you might face, which is why if you’re interested in learning more about the new concept, you’re in for a treat!

So, let’s dive deep into the pool of information and unveil why C-level executives are contented to have been introduced to Cardano Smart Contracts.

So, What are Smart Contracts?

Smart Contracts are automatized or pre-programmed agreements that are self-executing and hard to alter. These contracts track, verify, and execute the agreement between different parties. Furthermore, it does not involve the interference of a middleman or third parties.

These can be segregated into two categories:

– A framework that involves inserting a value concept from an individual actor or a set of players to another actor or a group. Additionally, the value must be governed by rules and circumstances along with an event to activate it. This kind of contract is called a ‘financial contract,’ which is best achieved utilizing a domain-specific language.

– Another framework involves the development of a program and an app, which comprise of a triangle:

Well, people closely rooted in the blockchain landscape have witnessed the Blockchain transitions over the years, and undoubtedly, Cardano is one of the most promising frameworks to look out for.

Cardano is an open-source, decentralized public chain platform integrated with a smart contract, similar to Ethereum. They act as a virtual agreement between two parties; however, the outputs are only executed when a few conditions are met.

The Origin of Cardano

Charles Hoskinson was one of the co-founders of Ethereum, who later backed out due to an ongoing dispute with the other co-founder Vikram Buterin in 2014. As per Charles, he had a different vision and wanted to make the Ethereum Blockchain commercial, which according to Vikram wasn’t the right step to take.

Thus, the fallout led to the introduction of Cardano- a scalable and sustainable blockchain that aimed to improve Ethereum and Bitcoin.

Not to forget mentioning, Cardano’s mechanism amalgamates mathematical principles and a unique architecture that makes it stand out in the modern generation of crypto solutions.

Programming Languages Used by Cardano for Its Smart Contract Evolution

Plutus is one of Cardano’s smart contract platform that enables the buildout of mobile applications that efficiently communicates with the Cardano blockchain.

Plutus allows programming to be done in Haskell (the fundamental language for Plutus) and allows the development of secure apps, asset acquirement, and construction of smart contracts.

The icing on the cake is that it eliminates the need for testing on a Cardano node; however, the following can be done with Plutus:

As mentioned above, Haskell being the fundamental language for Plutus is utilized by Cardano for the creation of a smart contract. Indeed, it doesn’t hold a high ranking; however, it is the primary choice of Cardano when it comes to integrating a programming language.

Notably, Haskell possesses the potential and power to lay down appropriate and robust codes. Furthermore, its codes are highly assured and hold a relevant degree of verification.

The Cardano ecosystem is a third-generation blockchain platform!

It involves two layers working as components of all the transactions. The two layers are:

Initially, Cardano’s developers planned to build a mechanism that splits a transaction’s value and its computational data. Therefore, the layer is designed to control the value movement between the sender and the receiver.

This layer is designed to help Cardano to recreate the Bitcoin ecosystem’s smart contract platform. One of the primary reasons behind the application of CCL is its potential to scale specialized protocols, which also involves the addition of hardware security modules.

What is Cardano used for?

Take a look at the best use cases of Cardano smart contracts:

The gaming industry has seen a groundbreaking transition, and the credit goes to blockchain smart contracts. Players can now join the eSports team without going through any paperwork. Isn’t it great?

The role of Cardano Smart Contract is to confine information, including the total time played, total scores, number of matches won, and much more.

A mortgage system incorporated with Cardano smart contract can exceptionally execute financial transactions and enables quick debt processing. Not only this, but it also enables monitoring mistakes in debt instruments.

It also streamlines automation, making the overall real estate process much easier for the customers and landlords.

Cardano’s smart contracts have a special place in the business world. For instance, one of the world’s biggest footwear and apparel brand named New Balance has incorporated Cardano for tracking the originality of its products throughout the supply chain.

4. Affirmation of Creds and Identify

Products developed by Cardano enable verification of credentials and identity. For instance, Atala Prism works as an identity management tool.

Indeed, Cardano has numerous use cases in the legal industry, including conceptual property rights, litigation, chain of custody, financial settlements, and more.

These contracts are automatized and are executed via blockchain, confirming a guarantee!

Cardano is an applaud-worthy framework when it comes to payment initiations and international goods transfer.

It is because of the improved liquidity of the financial assets!

Crowdfunding has come out to be a scattered method of acquiring startup cash, via which a project is developed to completion. Then, after sufficient funding is obtained, the product is developed and delivered to the finance contributors.

Furthermore, if the product does not receive complete funding, the generated funds are given back to the distributors.

A Cardano blockchain contract or Cardano smart contracts can be used for representing crowdfunding campaigns with the best of transparency and a commitment that funds would be returned to the contributors if certain conditions are not met.

The framework is also well-known for its consumer-friendly approach that enables the development of a marketplace that makes seamless trade possible.

Decentralized applications (dApps) are real-world examples of Cardano powered by smart contracts. They help in the creation of reliable applications with the support of Plutus and Haskell.

10. Other Uses of Cardano

– Enables the agricultural industry to audit the supply line

How to build a smart contract?

An agreement that involves payment or transactions transfers a sum as a token from the payee’s bank account to the other party involved.

Therefore, if the funds are insufficient to settle the payment in full, automatic warnings are generated. Additionally, funds are partially paid according to availability, and an ‘edit’ button in the contract is activated.

The close stage looks out for Cordano contract that need to be terminated. Its aim is to reimburse account owners with their funds, and notably, all accounts are reimbursed in a single transaction once the values, observations, and actions are defined.

It is significant to understand the three terms associated with ada contracts:

The term ‘value’ refers to the numbers that are dynamic, known as volatile values. For instance, slot number, the current balance, etc.

‘Observations’ are Boolean values acquired via a value comparison. Additionally, it can be monitored if a choice has been made or not considering the Boolean values.

Lastly, at every stage of the execution observations are highly important; however, actions are to be taken at a specified period only. Thus, these actions may comprise:

– Picking out an action amongst others

– Indication of external worth

Oracles are developed for ADA cardano smart contracts, and are represented as the decisions that an individual makes through a specialized Oracle role called ‘Kraken.’

In the case of a true conditional, if Obs cont1 and cont2 are executed, it’ll continue as the same, constructed on the Boolean value of the observation obs.

6. What Happens When Actions Occur

It is a smart contract that gets activated by the mechanisms that could or couldn’t take place at any point in time. Moreover, the cases in the contract narrates the incident when a certain action takes place.

It is mostly used for a lease agreement, and the let id val cont functionality on Cordana enables extending a value within the identifier. These values are later evaluated and stored under a name ID, while the contract gets extended as cont.

The technique makes it much easier to use abbreviations, but it also enables maintaining data that may change over time. For instance, the price of oil.

The assert stage doesn’t influence the contract’s state and continues as cont unless the observation obs is not true. It may also be used to ensure that a property holds in the contract if the static analysis fails.

When compared to other blockchain initiatives, Cardano varies in numerous ways, one of the primary examples being Cardano protocol development based on high-assurance code and peer-reviewed research.

Talking about the benefits that the development of Cardano smart contracts has to offer, take a look at the following:

– Cardano integrates its own Proof-of-Stake consensus that keeps a check on the transaction validation procedure. Its development promises 100% security and instant transaction processing.

– Cardano makes the development of custom NFT tokens possible along with hosting custom NFT marketplaces that impose a fare for NFT trade.

– Cardano is developed with the amalgamation of Web 3.0. Not to forget mentioning, Metaverse is going to be tremendously helpful if a business is to be integrated with IoT technology.

Agreements and contracts have a profound impact on the financial ecosystem; and fortunately, Cardano smart contracts are likely to offer an effective digital space for the execution of real-world contracts.

Now that we have presented multiple use cases of Cardano smart contracts in this article, do you think it’s an exceptional approach for dealing with agreements?

The best part is that Cardano is overcoming all the drawbacks faced by Ethereum, and is primarily opted for contract building.

How about initiating your smart contracts journey?

If we are on the same page, now is your time to connect with a mobile app development company in USA for further assistance on the subject!