iPhone 8X and 8 Plus: The New Generation iPhones Will Take Over the World! 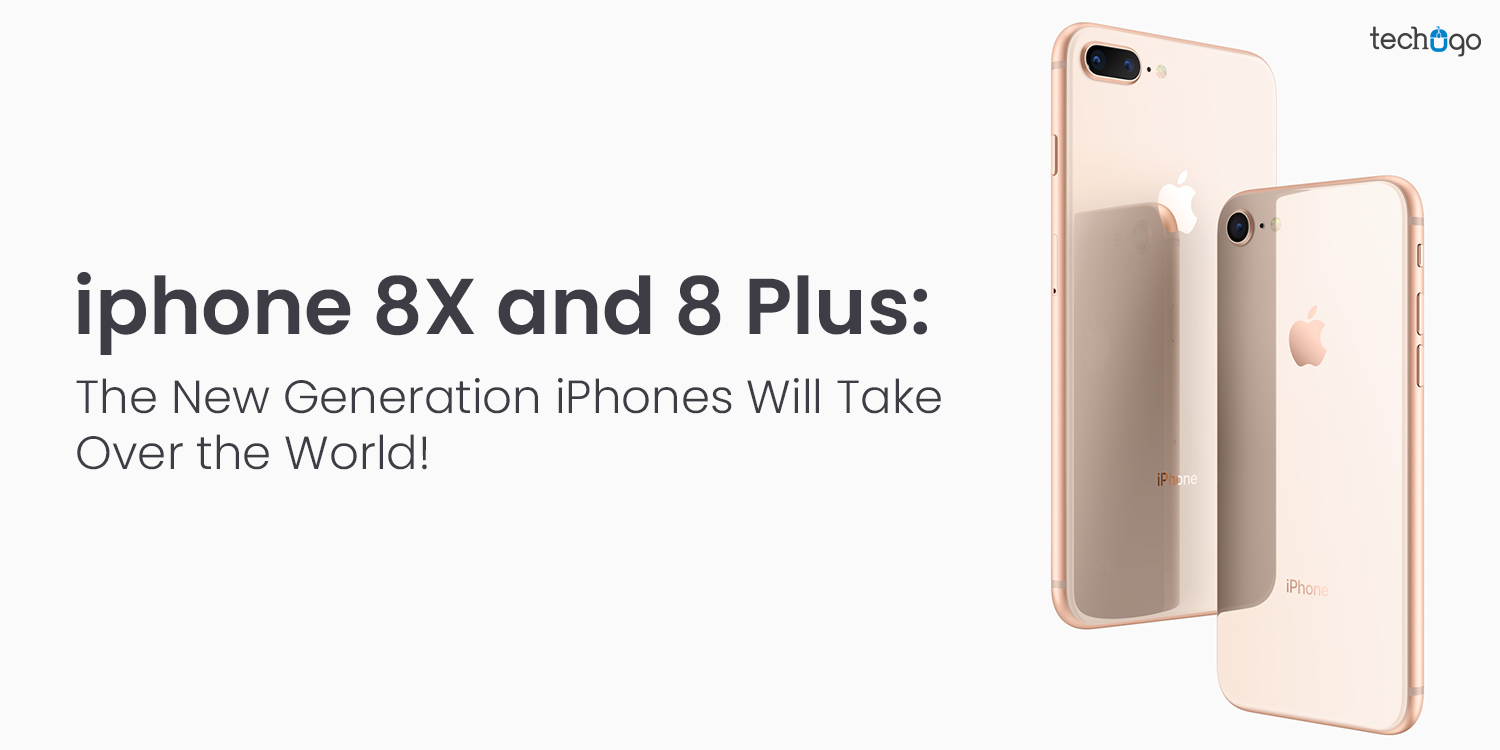 The wait is finally over as Apple announced the iPhone 8 and iPhone Plus smartphones during the launch event at the brand new Steve Jobs Theatre. Needless to say that with each iPhone model, Apple sets a new record to be broken further, by the next series on the way.

At the Apple conference, the CEO had already shared the glad tidings about the new iPhone 8, for which the users were curiously waiting across the globe.

Additionally, there had been many speculations and rumors circled, but 12th Sep made us experience the very factual information about the iPhone 8 series. So here are the most noted features in iPhone 8 series for you all.

Let’s dive deep into the pool of information about what the future of smartphones holds ahead of us!

More About iPhone 8 and iPhone 8 Plus

The new iPhone 8 and 8 Plus announced by Apple feature an aluminium and glass design that comes in three exceptionally beautiful colors. In addition, it comprises a durable glass, Retina HD displays, and an A11 bionic chip specially designed after keeping the Augmented Reality experience in mind.

The icing on the cake is its best-ever camera refurbishment with single and dual cameras incorporating portrait lighting.

“iPhone 8 and iPhone 8 Plus are the new generation iPhones that improve everything we love about iPhone,” says Philip Schiller, Apple’s senior vice president of Worldwide Marketing.

This is not it!

iPhone 8X Has Gone All Glass

The Apple X comes with an all-glass front and back. As per Apple, it suggests,“the most durable glass ever in a smartphone in silver or space gray, while a highly polished, surgical-grade stainless steel band seamlessly wraps around and reinforces iPhone X. A seven-layer color process allows for precise color hues and opacity on the glass finish, and a reflective optical layer enhances the rich colors, making the design as elegant as it is durable while maintaining water and dust resistance.

Indeed, 8X is a futuristic device and has every possible element to make this device an impeccable piece. It has a stainless steel band and glass back curving into a 5.8-inch OLED display with True Tone, which stretches down beautifully across the front of the phone. Another big surprise for the user 8X is that it is less slippery and thicker, making it a perfect choice to be added to your Must-buy list. Furthermore, it features Apple’s highest resolution phone display: 2436 x 1125 pixels at 458 pixels per inch density (PPI). The company has termed this Super Retina display. The HDR display also supports Dolby Vision and HDR10. Furthermore, iPhone 8 has the a 4.7-inch and the 8 Plus has a 5.5-inch Retina HD display!

iPhone 8 has indeed revolutionized the design and has various impeccable design features. For instance, iPhone 8X’s Home button is now replaced with a swipe up gesture to land on the home screen. It uses Face ID to unlock the phone and has a True Depth camera system on top of the display. Moreover, Face ID is a robust security feature that enables the users to unlock the phone by just looking into the phone’s camera.

It works by projecting more than 30,000 invisible IR dots onto the user’s face. Further, the Face ID reads the face, matches it with the stored image on the phone using a neural network processor built into the phone, and unlocks the same.

The iPhone 8X will have Apple’s latest processor, the A11 Bionic with an integrated Neural Engine for face recognition, which will have six cores that deliver up to 30 percent faster graphics. Not only this, but it extends battery life by up to two hours when compared with the iPhone 7. The phone has 3GB RAM and two internal memory configurations of 64GB and 256GB, with no support for memory expansion.

iPhone X has the Vertical Dual-rear camera set up with 12 MP 12MP wide-angle and telephoto sensors along with the aperture of f/1.8 and f/2.4, respectively. It can record videos with 4K resolution at 24 fps, 30 fps, or 60 fps and has optical image stabilization for a smooth video. Additionally,  it can record slow-mo videos with a resolution of 1080p at 120 fps or 240 fps. It also incorporates the new animated emojis, which react to your face and some extremely impressive new filters in Snapchat. Most interestingly, the rear cameras have a feature, letting the users click 8MP still photos while recording a 4K video. The phone has a 7MP front camera with an aperture of f/2.2.

iPhone 8 Plus has a dual 12MP with an aperture rate of f/1.8 rear camera set up with a wide-angle lens and a telephoto lens which supports the portrait mode.

iPhone X has a never-before 5.8-inch all-screen OLED Multi-Touch Super Retina HD display and a 2436×1125 resolution with a pixel density of 458ppi. The front and back sides of the phone are made of glass and are kept in a hold with a steel frame. All the Apple 8 series models are both water and dust resistant and are available in three colors: Silver, Space Grey, and a new gold finish. Finally, Apple has brought wireless charging support to the iPhone 8 series, and these phones will work with Qi chargers. With AR, Apple has celebrated the success further with new gyroscopes and accelerometers for accurate motion tracking. Also, Apple has opened AR Kit for developers to experience the best.

Apple would also launch its own line of complementing accessories, which would consist of leather and silicone cases. These cases will be available in a wide range of colors and lightning docks in color-matching metallic finishes.

Eventually, the iPhone 8X from the iPhone 8 fraternity has set the competition high in the Smartphones market and has increased the enthusiasm about every bit of it.

Since the time iPhone 8 was announced, most of us have been curious to know the price of the iPhone 8 series. So here we go…the iPhone 8 series would be available in only two storage options: 64GB, and 256GB. Apple iPhone X will come at the whopping cost of Rs 89,000 for the 64GB and the 256GB version will cost Rs 102,000, and it will be launched officially on 3rd Nov.

Are you planning to get your business acknowledged on a global platform through the mobile app solution? Then you don’t need to sweat out your efforts anymore.

Because Techugo- a leading iPhone app development company has got you!

We carve out the best possible mobile app solution complimenting the business goals of various established brands and startups across the globe. Thus, you can get in touch with our experts for further assistance on your app idea!

How does an Artificial Intelligence App add Great Potential to your Business?

Knowledge is power. The data you gather in the course of your business activities, such as information about your production line efficiency or statis..