I won’t bore you by saying I had a humble beginning, I started off as a single room and blah blah… no! I didn’t. My ancestors did yes, not me. You must be wondering how come a “brick-and-mortar entity”, like myself, has ancestors… well, it all started somewhere, at some point of time in history, right?! The initial camps or rooms that gave way to medicine as a subject, they are the ancestors I was referring to.

Anyway, I didn’t have that humble a start. I was built on a huge piece of land, with facilities that were sufficient to provide decent enough healthcare to patients. I wasn’t ahead of my times either. But, little did I know, all the other intelligent non-doctors (ALSO) would prove to be harbingers of a revolution. An awe-inspiring, never-ending revolution – supported by the greatest of contrivance ever created – technology!

I am sharing a few excerpts from my personal diary… the notes were mental or electronic… don’t delve into that. I just made these notes with the changes that kept taking place. WHY? Just to keep a track of my growth, change, development… my very own history… Or mainly for the simple fact that every place or profession is teamwork, supported by several other professions. I always wish to remember that we all, no matter where we live, what we do for a living, whether living or non-living… we all work in tandem.

The very first make-over, after my establishment 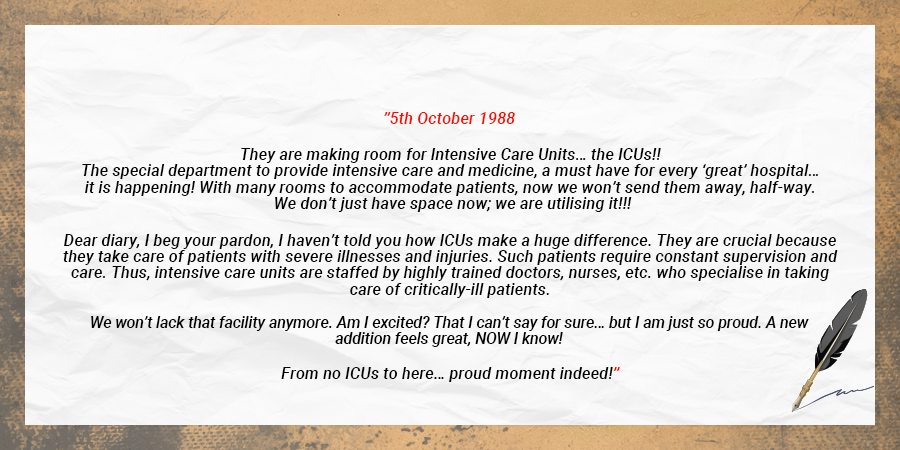 The newest addition created an unexpected buzz. The staff, patients, people around, everyone was yapping about it. The corridors had conversations referring to some newspaper articles covering this event. This indeed was huge, for starters!

What role such units play in saving lives, was yet to be witnessed. The good part, incorporating them did help us save many lives. 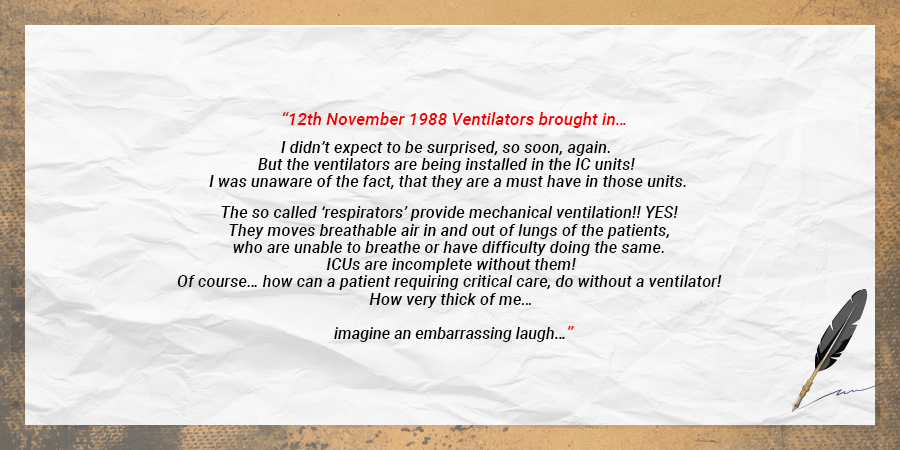 The doctors seem elated. The press reporters have been on constant visits. I imagine it is a big shot, based on the echoes “The late 80s are proving great for them!” “They will prove even better for patients…”, another had said. 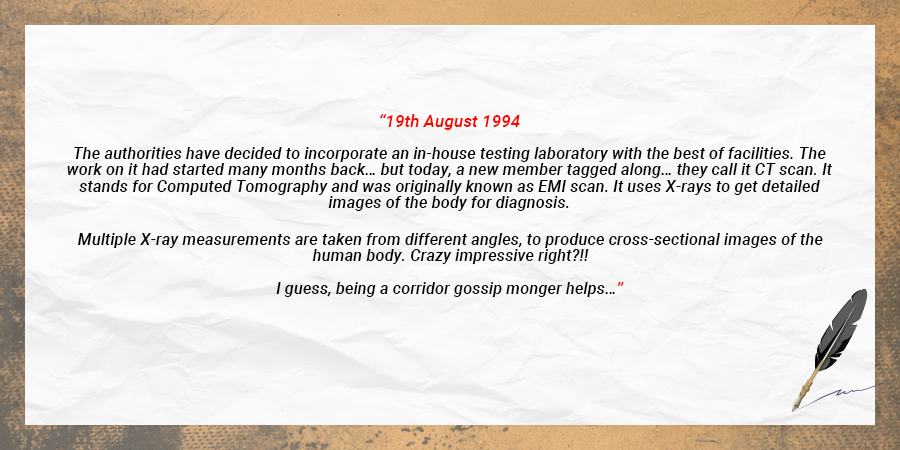 Within a short span of time, another addition followed. The reason, it was urgently needed and was a better and improved version… 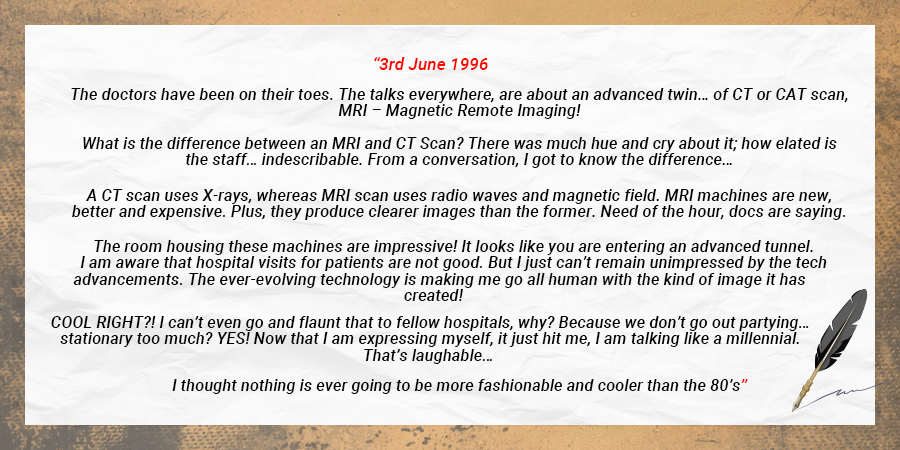 The facility now employs more doctors. The number of patients visiting, have exponentially increased in the past few years. Whether it is the charm of the doctors, or the new machines or both… I can’t say for sure.

New and better machines are being roped in. The testing facility is helping patients immensely, as everything is being taken care of, under one roof.

Adding on to the concrete, for the better! 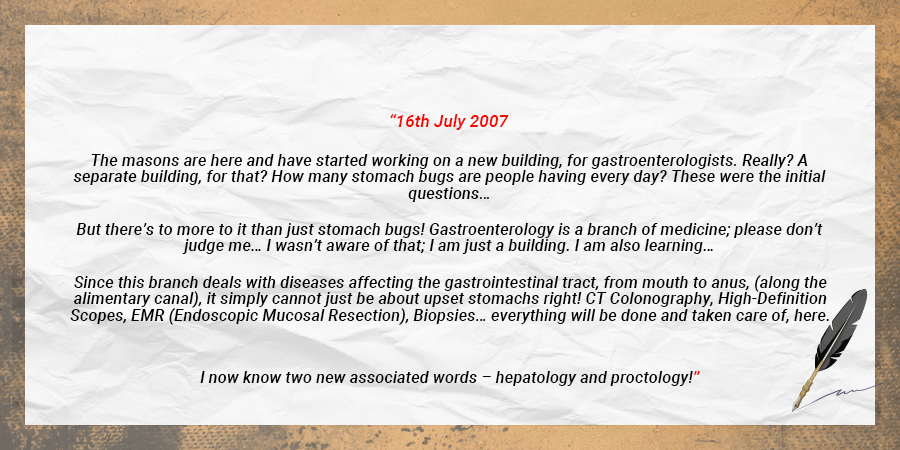 Since the construction of the new building, I haven’t been at ease. There is some or the other new addition quite frequently now. Even if new and improved machines are not being brought here, a part of me is always getting tweaked, for good of course. To put simply, it feels like a perpetual make-over!

A few years back, all these changes would have been a downer for me… but not anymore! The transformation from there to here, is phenomenal. The best part is, people rely on this facility, it has managed to create an image of an imminent institution with dedicated doctors and healthcare workers. It feels sturdy, to be absolutely ‘CONCRETE’ about it! (I am glad that concrete here fits literally and figuratively!).

Change is the only constant… 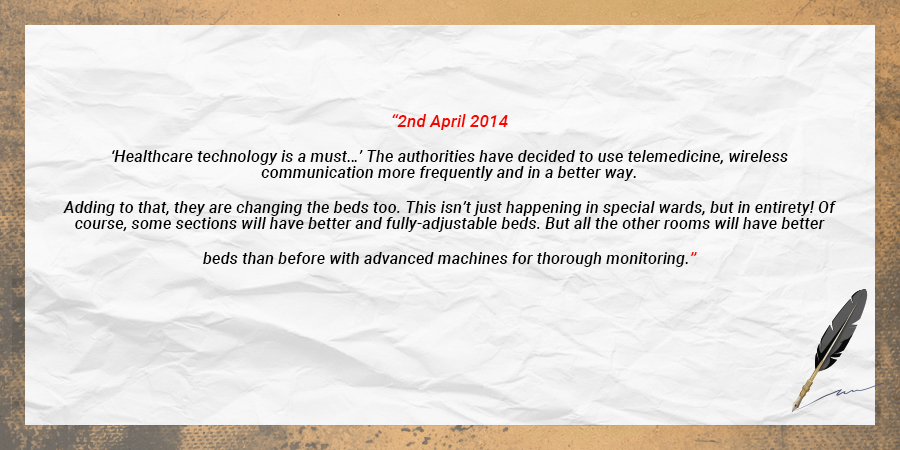 The future of healthcare has been shaped since, forever. Scientists are coming up with enhanced techniques and solutions for the better. 3D printing, Artificial Intelligence, Virtual & Augmented Realities, nanotechnology, robotics, are few of the most mind-blowing tech developments that are also aiding the healthcare sector.

It is of utmost importance that everyone…EVERYONE works hand-in-hand and in-sync with the evolving methods and technology. 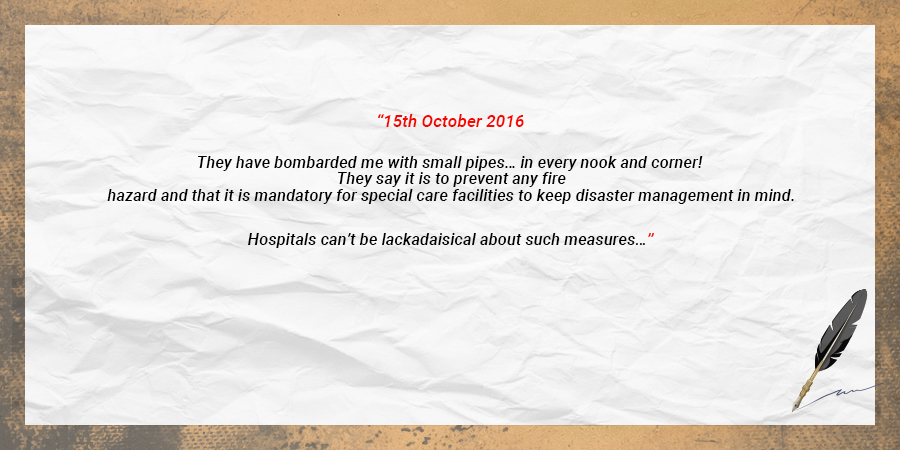 I was honestly relieved after the fire safety equipment were installed; I am a better equipped concrete structure that is being upgraded in months. Times are always testing, but technology undoubtedly, has made working around things more efficient! 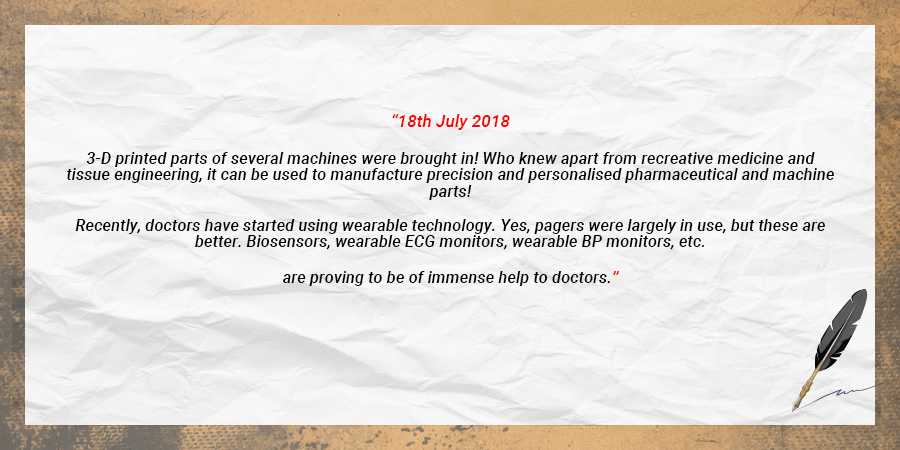 Who could have ever thought that technology could be wearable! That basic monitoring of one’s health won’t require healthcare professionals; smart equipment would take care of that! A few times, it feels surreal. The speed with which the human race is advancing is stupendous! It is a bit scary, but exhilarating too! 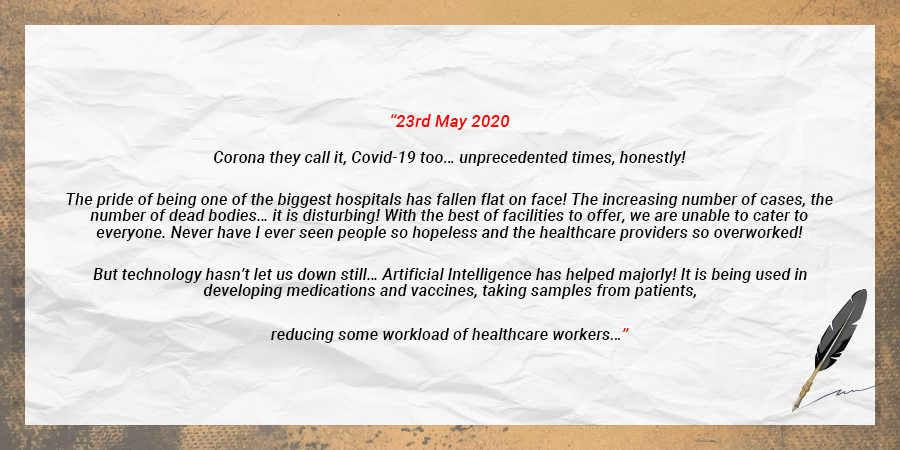 The meds and vaccines are yet to come out, but tech-driven methods are contributing majorly in screening testing, analysing the disease and the conditions of patients. I know, I am not supposed to have a shred of emotion, but I hope everything gets better and on track, SOON…

From containing leprosy in secluded rooms to building huge mental asylums, from letting ailing people suffer as a punishment to finding cures and operating on them, the field of medicine has grown and come a long way. Some people’s efforts gave birth to the likes of me – buildings made out of bricks, without a life of their own, but having working warriors in white coats, saving the ones with lives.

The improvement and growth have been tremendous, the change… mind-blowing. But… over all these years, what hasn’t changed is the dedication of all those who work inside the likes of me. Concrete creations like myself become credible because of doctors and the supporting staff.

Of course, they get born, grow old and die…but their efforts live! I have been standing for several decades, I know many doctors have come and gone, but they all appear the same to me in those white robes, taking care of people, using their expertise. This building, me… I just feel good to be able to play a part in the treatment.

It is humbling, people look up to the likes of me with hope, that we might save them. But believe me, a building doesn’t do that, even the one with the best facilities. What makes a healthcare facility dependable and credible is the staff, in entirety; not just the buildings, not just the doctors or nurses, but everyone… starting from the guard at the gate. We all are a team; though I am part of it, I just house them… that’s it.

Want to Create Your Own Money-Making App? Take These Drastic Measures

Launching your application and making it available for downloads will help you generate a lot of income.  Is that what you are thinking? If yes,..